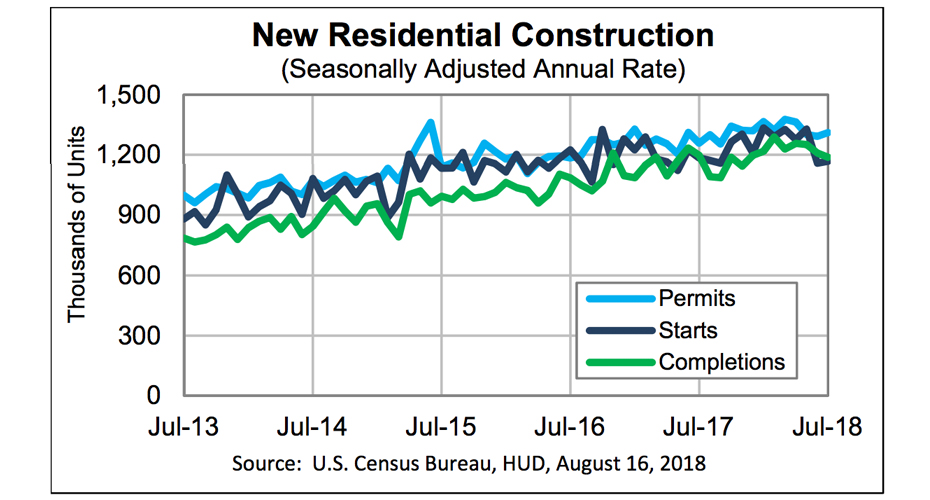 For the housing market, 2018 began with many of the same storylines seen in 2017: a continued steady, if incremental, climb, but with challenges looming in the background that continue to hold some builders and buyers back. Most notably: tight inventory, tight labor, and high material costs.

The year kicked off strong with January housing starts at a seasonally adjusted rate of 1,326,000, which was 9.7% above December’s revised rates and 7.4% higher than January 2017. Building permits also saw dramatic growth, up 7.4% from December and 7.4% from last January to reach a 10.5-year high.

“The decline was concentrated in the volatile category of multi-dwelling units—apartment buildings, condo complexes, and the like. It’s a volatile category and there’s also some evidence that the market for rentals is becoming saturated,” said MarketWatch in its analysis of the data that also described the lull as likely temporary. “Construction on single-family homes, the bread and butter of the housing market, actually rose in February. These homes account for 70% of all new residential construction.”

The decline in multifamily is of little surprise, as that market carried much of the inventory burden immediately after the recession and experienced sky-high numbers for several years until a peak in 2015. The combination of oversaturation and Millennials shifting from renting to owning is driving a slowdown in demand for those housing types. Robert Dietz, chief economist for the NAHB, said the association saw a higher than expected decline in multifamily starts in 2017 and is anticipating another decrease in 2018.

The strength of single-family may be a welcome sign, as one of the biggest challenges in the market is simply a lack of inventory, particularly for entry-level detached homes.

“Demand for housing has continued to outstrip the number of properties available for sale, pushing prices higher and frustrating many would-be buyers,” MarketWatch said in its analysis of January housing starts. “Builders have responded in part by steadily increasing construction of single-family homes, a sign they have confidence in the economy. Stand-alone homes are almost always sold, rather than rented.”

As Builder magazine reports, Millennials are the largest buying group (accounting for more than a third of home purchases) but are still being held back by low inventory and high housing costs. “Even though sales to Millennials reached an all-time survey high, stubbornly low inventory conditions pushed home prices out of reach for many,” the magazine said in its analysis of a National Association of Realtors (NAR) study. “As a result, the overall share of Millennial buyers remains at an underperforming level.”

The NAR study also found that Millennials are turning to the suburbs, not urban condos, for affordable options large enough for their growing families. “Led by Gen X (86%) and Millennial buyers (85%), a detached single-family home continues to be the primary type of property purchased, and older and younger [Baby] Boomers were the most likely to buy a multifamily home,” the article states. “Only 2% of Millennial buyers over the past year bought a condo.”

Along with inventory challenges, home prices also still continue to outpace wages, Dietz notes, but the gap is improving. The recent tax cuts could provide a further boost.

Builder confidence in March was down for the third month in a row, to 70 from 71 in February, but is still in strong territory and is just one point off of March 2017 figures. “Builders’ optimism continues to be fueled by growing consumer demand for housing and confidence in the market,” NAHB Chairman Randy Noel said in a statement. “However, builders are reporting challenges in finding buildable lots, which could limit their ability to meet this demand.”

Indeed, in an NAHB/Wells Fargo survey in December, cost and availability of labor was the No. 1 problem builders reported, followed by building material prices and lot availability.

Dietz says material prices have jumped up to one of the top two concerns in recent months.

In February alone, softwood lumber rose 5.8%, which was the material’s highest jump since 2012 even after a year marked with increases in the category, according to Eye on Housing.  Gypsum was up 4.2%, OSB climbed 3.1%, and ready-mix concrete was up 0.4%. The NAHB also has expressed concerns about the impact of steel tariffs on construction costs, particularly in the wake of the softwood lumber tariffs.

The challenges of inventory that have kept the housing market at a slower pace could prove beneficial should the larger economic picture show signs of decline. “The amount of pent-up demand is sizable due to years of underbuilding,” Dietz notes. “We don’t have a recession in our forecast in the next couple of years. I think the industry is set for some growth. Short-term [factors are] based on cost and interest rates. The long-run [factors are] demographics, and those are in our favor for building more single-family homes.”